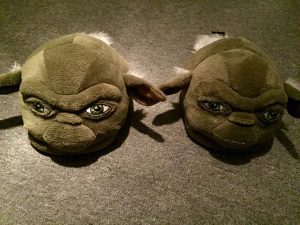 Above you can see a picture of my Yoda-slippers – he looks really weird I know, (they were cheap).

Anyway, the thing is that I’ve been wearing these during most of this whole process. And this is not a joke. I do not really know how it started. Superstition? Some compulsive disorder? Pretending I will get powers and become some kind of… Jedi master and be able to make the piano compose, play, record, mix and master my songs by itself while I’m focusing on other things? That would have been very practical. Cause It’s really hard for me to just ”switch of” my brain when I’m creating. I get obsessed, more or less. I can’t focus on anything else. And I don’t want to focus on anything else either.

That hasn’t been that big of a deal in the past but now all of a sudden I have a wonderful son, a lovely fiancee and an awesome dog to think about as well! A totally new situation in every way. So before I started this process I was picturing a nightmarish scenario in my head where I turn into Jack Torrance in The Shining, and my fiancee – after weeks of hearing me work and geting shout at, would find a big pile of sheetmusic with a few single notes repeating after each other or something.

Fortunately that never happened.. Actually my family has made me a better and more focused pianist and composer I would say. And my music in return, makes me a better father, husband-to-be and dog owner. And why is that you might think? Well, It’s quite simple. First of all my music comes from emotions. And if there’s something that can really trigger your emotions – in all its forms – it is to have a family. And my musicianship makes me feel well. And If you feel well, it’s a lot easier to make your family feel well.

And secondly, now I really need to take breaks. Cause I really want to be a good and present father. Both physically and mentally. And if you don’t take breaks you get tired and if you’re tired you don’t think straight, and if you don’t think straight you become less professional in whatever you’re doing. You can’t see the forest for the trees as we say in Swedish. You get a bit blind. That’s pretty obvious I know, but as I said in the beginning, it’s a lot harder than it sounds if you’re in a creative state of mind. Balance is the key. To everything, I think.

That’s all for now. I will update a bit more frequently in the coming weeks. More news are coming! I will be in my former producers studio tomorrow to record some live strings for a few songs. I’m really looking forward for you to hear these pieces!

And I forgot to mention that the album will come both as a physical CD as well as a digital release. Just like my first two albums.