Fans! Just want to let you all know that I have a new single coming your way soon!

The song is called Somewhere (I shortly mentioned the song earlier here) and was the 3rd (I think…) song I made during the creation process of my upcoming 4th album. The song was recorded in Johan Arvelis studio in Nordanälden based in the municipality of Krokom, Jämtland County, Sweden.

Arveli is a musician, songwriter and producer who has worked with the likes of american countryartist Doug Seegers, the award winning singer/songwriter Annika Norlin (Hello Saferide, Säkert!) and young swedish americana star Ellen Sundberg, among others. He is also quite possibly the biggest Dave Grohl-fan in the world (no joke!) 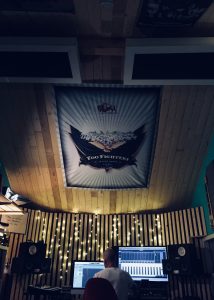 The strings are played by Katarina Åhlén (Cello) and Peter Roos (Violin) both of whom I’ve had the pleasure of working with before.

I’m not gonna reveal anything about the actual song. What’s the point in that? The only thing I know is that I’m excited for you to hear it, as well as the other songs I have on the album!

Stay tuned and have I nice evening